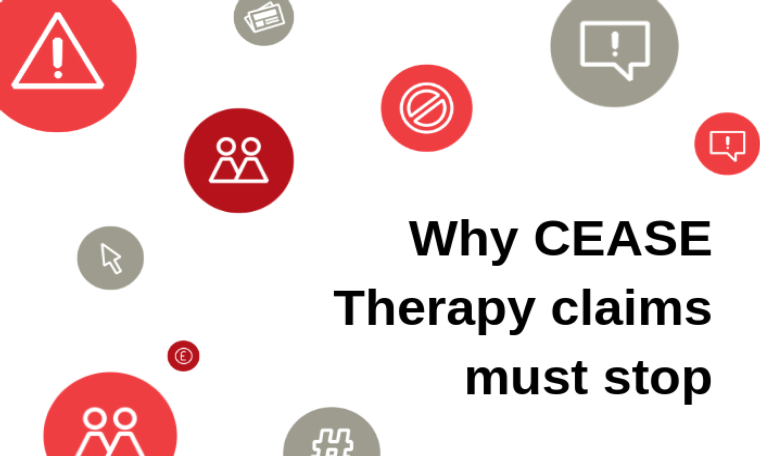 Our Chief Executive, Guy Parker, discusses what CEASE therapy is and why claims that it can treat or 'cure' autism must stop.

What would you say if I told you I could cure the lifelong developmental disability, autism? Chances are you’d say I was wrong.  You might even think I was being offensive. You’d be right on both counts. As the National Autistic Society (NAS) makes clear, “autism is not an illness or disease”. It cannot be cured. So to see some people claiming to do just that is a serious concern. Misleadingness and offering false hope aside, there’s potential harm behind such claims. So we’re taking steps to stamp them out.

What exactly is being advertised? It’s a process known as Complete Elimination of Autistic Spectrum Expression, or CEASE Therapy. It supposedly involves the removal of ‘toxic imprints’ caused by vaccines, toxic medications and other toxic substances and some diseases. ‘Orthomolecular’ support in the form of nutritional supplements (commonly high-dosages of vitamin C and or zinc) are recommended to ‘patients’, along with dietary restrictions.

The use of medical-sounding jargon may impress, but the claims have no scientific credibility. They also run contrary to NHS guidelines.

Discouraging vaccinations for children can have dire, potentially life altering or life ending, consequences. Overdosing on vitamin C might not sound particularly grave, but diarrhoea, nausea, vomiting and abdominal cramps, amongst other symptoms, aren’t pleasant. If a child was to suffer from them, the consequences could be severe, more so than they would be for an adult. Too much zinc again conflicts with NHS advice, risking anaemia and weakening of bones.

What are the professional credentials of those providing this procedure? Sadly, there are few barriers to becoming a CEASE therapist. Various websites promote training courses that last three to five days, after which practitioners will be ‘qualified’ to administer the ‘treatment’ unchecked.

It’s the mental and physical well-being of young people in particular that concerns us here. Typically, CEASE therapy is promoted as a treatment for autistic children. Parents, guardians, medical professionals or anyone with an interest in keeping young people with autism from harm will doubtless be alarmed that these dangerous claims are being made.

So what are we doing about it?

Recognising the need to protect vulnerable people, health-related products are subject to tough rules. Paramount is that ads must not falsely claim that a product is able to cure an illness or developmental disability. And ads must not discourage essential treatment for conditions for which medical supervision should be sought.

We’ve already taken action against one practitioner last year, banning their misleading claims that CEASE therapy could ‘address’ autism, ADHD/ADD, dyslexia, dyspraxia, depression and schizophrenia in adults and children. But this problem extends beyond one or two people.

There is an ongoing wider problem and that will require concerted and coordinated regulatory intervention. We are aware of around 150 CEASE therapists operating in the UK. Our Compliance team has issued an Enforcement Notice to all of them setting out clearly that they cannot make direct or implied efficacy claims in their ads, including on their own websites. Those failing to get their houses in order will be targeted with further sanctions.

As part of that, our team has referred several cases to Trading Standards for further investigation. Any breaches of criminal legislation could lead to prosecution. Others could well follow.

Bodies such as the Society of Homeopaths (SoH) have a key role to play here too. Following an intervention by The Professional Standards Authority last year, SoH is now required to ensure its registrants who use and advertise CEASE therapy do not breach its Code of Ethics and Practice. We will be monitoring whether SoH’s requirements go far enough.

Our work in tackling this will continue into 2019. We’re determined to put a stop to misleading and harmful ad claims for a treatment that poses potentially severe health risks. The NAS point out that “Often people feel being autistic is a fundamental aspect of their identity.” Anyone claiming to cure the incurable, something that is part of the fabric and fibre of an individual’s personality, really needs to stop.