Remember, remember and avoid getting burned this Bonfire Night 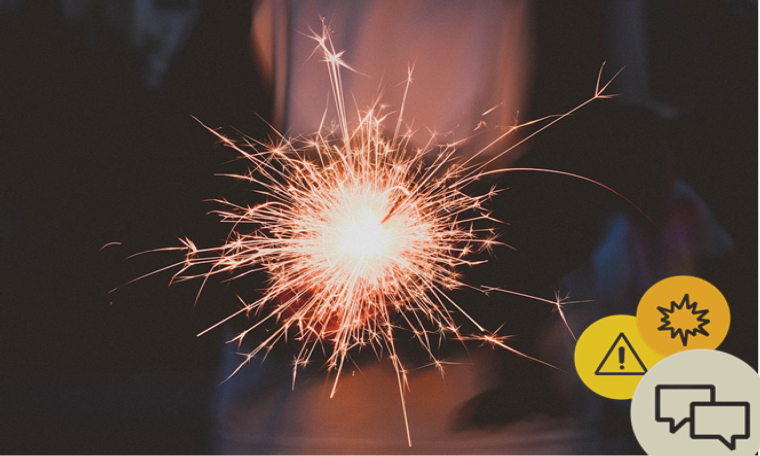 As Bonfire Night explodes into our calendars once again, ads that include pyrotechnics can set off an increase in complaints to the ASA about the irresponsible depiction of fireworks, sparklers and bonfires.  Be a smart Guy by following these top tips to keep your Bonfire Night themed ads away from ASA interrogation.

Be safe, not sorry

Ads, especially those addressed to or depicting a child, must not condone or encourage an unsafe practice.  So if you plan to show any fireworks or other related imagery, make sure that you show safe and responsible use and target your ads carefully.

Although the fireworks in this case were actually safe to hold in your hand and the ad was targeted at men and women over the age of 20, the ASA ruled that it wasn’t possible to prevent some children seeing the ad, and given the potential for emulation, concluded that the ad condoned and encouraged an unsafe practice.

Given that ads must not cause fear or distress without a justifiable reason, if you’re planning a firework/general safety message around Bonfire Night, make sure you avoid using a shocking claim or image merely to attract attention.  Always balance the importance of the message with the potential for claims and images to cause distress rather than appropriate caution.

Fireworks – not a responsible mixer

Our rules around responsible advertising and alcohol  state that ads featuring alcohol must be socially responsible and not encourage people to adopt a style of drinking, such as excessive drinking, that would be considered unwise.  Add fireworks in to the mix and you could find your ad the basis of a complaint to the ASA, like this one, which used Bonfire Night as an excuse to have a party and offered a promotion for cocktails.  Though in that case the amount of alcohol available was limited, so it was ruled that the ad didn’t encourage excessive drinking – ads that encourage people to drink any alcohol while handling fireworks or tending to bonfires are likely to be burnt to ashes.

Alcohol ads must also not be directed at under-18s, and the ASA received a complaint about this Facebook ad for a drinks brand which used firework imagery and references that might have had appeal to under-18s and youth culture.  Although it was considered that the firework images, references and bright colours could appeal to children, after considering the ad in context to its style and placement, they ruled that the ad wouldn’t have particular appeal to under-18s.

Fireworks have year-round appeal and the sparkle, colour and fizz of fireworks might seem to fit your marketing campaign perfectly.   So even if you’re not advertising around November and Guy Fawkes’ Night, make sure you’re familiar with how our rules apply whatever your communication and remember that in some sectors there are very specific rules, such as motoring.

In this ad for a car, fireworks were seen attached to the front and roof of a moving vehicle and it was subject to a complaint that it encouraged harmful and irresponsible driving.   On this occasion the ASA ruled that the scene would be interpreted as fantastical and that the ad was focusing on the character of the car not behaviour that should be emulated. It’s worth bearing in mind though, that a more realistic and easy to emulate depiction could have easily resulted in a very different decision.

If you want more advice on how to avoid your non-broadcast ads going up in smoke, then get in touch with our Copy Advice Team who will be happy to help with your display.